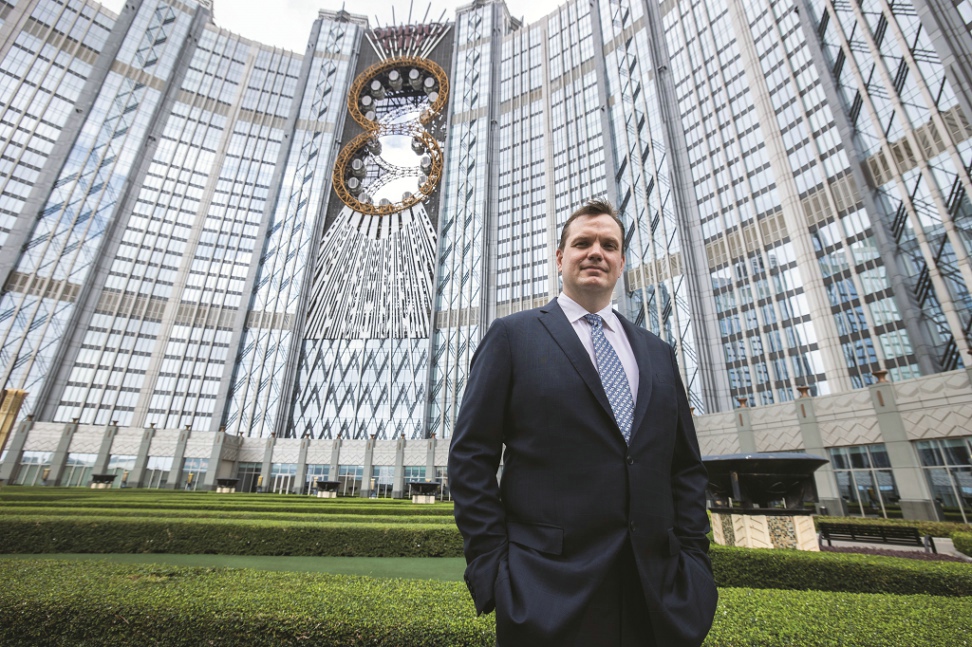 New amenities at Studio City Macau in its Phase 2 development, due for completion in December, will open up more opportunities in the family and MICE markets for the resort, the senior vice president and general manager said. Kevin Benning.

Surfing, indoor water splashing, rock climbing, high ropes courses… These are just a few of the many exciting activities residents and travelers alike could soon indulge in at Studio City Macau – in addition to exquisite dining, events bespoke and convention experiences, a variety of accommodation options and the iconic figure-of-8 ferris wheel – upon completion of Phase 2 of the Cotai Integrated Resort.

In an interview with Macau Business On the new Phase 2 amenities, Kevin Benning, Senior Vice President and General Manager of Studio City Macau, is confident that this US$1.2 billion (MOP9.6 billion) expansion would help the resort attract more families and MICE (meetings, incentives, conferences, exhibitions) visitors.

According to previous information released by Melco Resorts and Entertainment Ltd, the gaming operator and majority owner of Studio City, Phase 2 of the resort, which covers approximately 250,000 square meters of gross area, is expected to be completed by December 2022. “We’re very pleased with the progress of construction,” says Mr Benning. “At this stage, we are still on schedule and we continue to work with the government to determine the right time to open. We see no worries [with] complete the project on time. We are very excited about this.

“There’s been a big shift in our direction here with Studio City,” he continued. “Over the past few years, throughout the pandemic, we’ve repositioned ourselves to be more mass-focused, more family-friendly,” he says of the property, which officially opened in 2015.

What Melco described as “Asia’s largest indoor and outdoor water parks” in Phase 2 are among the attractions expected to help the resort town of Cotai achieve this goal. An outdoor water park, named “Studio City Water Park”, was launched last year, with several slides and rides. This outdoor attraction reopened last month, at the start of swimming pool season in the city, and will soon be complemented by an indoor water park where visitors can enjoy splashing water in all seasons.

Regarding the indoor water park, which will include more wave pools and slides, as well as a surf center, the general manager remarks: “I go there about every two weeks to check it out. eye, and I continue to be amazed. . Have an indoor water park that we can open all year round, seven days a week, [and] we don’t have to worry about bad weather anymore, is going to give us a very unique selling proposition for Studio City.

Other highlights of the Phase 2 development include the Super Fun Zone, a four-story, over 28,000 square foot entertainment facility. “It will be something for everyone, from toddlers to adults,” Benning says. “It’s a place where you can bond as a team, take your work crew up a rock face or do a ropes course… On one floor there’s a giant net that lets people to jump up and down, climb and between layers.

The 28,000+ square foot area, which also includes a huge treehouse and party rooms for kids to throw parties, is set to open in July. “I was playing there personally last week; that’s how nice it is. It will be an amazing addition to Studio City,” he adds.

Enhancing its existing offering of approximately 1,600 hotel rooms, Phase 2 will bring approximately 900 additional rooms and suites to two new towers in Studio City. One of them will be “W Macau – Studio City”, the city’s first W hotel, through the resort’s strategic partnership with Marriott International, which operates more than 30 internationally renowned hotel brands, including W Hotels. W Macau is designed to have 557 rooms, including 127 suites, a spa, gymnasium and indoor swimming pool as well as approximately 1,100 square meters of event and meeting space.

Another new hotel tower will be self-managed by the resort operator, like the existing Celebrity and Star towers in Studio City. “Celebrity is much more of a MICE-oriented hotel, and Star is an excellent Forbes five-star hotel, but Star’s rooms aren’t quite [as] big…compared to our new stand-alone hotel, which is going to provide us with more premium room products,” says Benning, adding that the new stand-alone hotel will have approximately 350 rooms. “It will be a very contemporary luxury hotel with several duplex villas and more suites.”

This additional venue offering is set to help accelerate Studio City’s MICE business, which now features 4,000 square meters of indoor event space and the 5,000-seat Studio City Event Center. “From a MICE business perspective, that wasn’t always our main focus in the past because we didn’t have the rooms. With 900 additional rooms on board, it completely opens us up to more of that. [MICE] market and more of the family market,” he notes, adding that the new MICE facilities at W Macau will focus on events for small groups and catering to “a bespoke luxury meeting experience.”

In addition to these offerings, the project’s Phase 2 development will also include a six-screen Cineplex, retail complex and gaming space of over 2,300 square meters, Melco said. Speaking briefly about the new gaming space in the interview, Mr. Benning says, “It will be premium, mass-oriented, [and] aligned with our Qi Long experience that we have through the Melco brand. Qi Long refers to Melco’s brand of high-limit gaming areas and managed services at its properties.

As Studio City repositions itself to be more mass-focused, existing food and beverage and retail offerings, as well as other activities within the property, have also been adjusted over the past two years, according to the Director General. For example, a car show by Chinese electric vehicle maker BYD was recently held at the resort, alongside a picnic for dogs and their owners. “It’s not just ultra-high-end luxury. We know that as we bring in more of this family-friendly gear, our retail mix needs to change as well,” Benning adds.

Melco’s latest financial results show Studio City’s quarterly operating revenue was flat year-over-year at US$88.2 million during the October-December 2021 period, while the site generated negative Adjusted EBITDA of US$100,000 compared to negative Adjusted EBITDA of US$5.5 million in the last quarter of 2020. The property’s total non-play revenue reached $17.7 million in the fourth quarter of 2021, down 10.6% year-on-year. Prior to the Covid-19 pandemic, the site’s operating revenue was US$358.3 million, while non-gaming revenue reached US$52.1 billion in the fourth quarter of 2019. according to figures from Melco.

The general manager also describes the pandemic as “a blessing in disguise”, giving the team more time to introduce new amenities and offers. “It gives us the opportunity to start from scratch and come up with what the right vision for the future is,” he says. “When the borders open, I think Macau will be great.”

The latest government figures show that the number of travelers to Macau increased by 8% year-on-year to 1.88 million in the first three months of 2022, although a drop of more than 30% in the number of visits in March, due to the new wave of coronavirus outbreaks across the border. Citywide gaming revenue fell 24.8 percent from a year earlier to MOP 17.78 billion ($2.22 billion) in the first quarter of this year, the data showed. Since the start of the Covid-19 pandemic more than two years ago, the city has only engaged in largely quarantine-free agreements with the mainland.

Looking ahead, Benning also hopes the new Phase 2 facilities and offerings will help Studio City reach customers beyond the city and neighboring Guangdong province. “Right now, as you see in the market, it’s much more local-focused and Guangdong-focused. This [will] be like this until the border starts to open up,” he says. “But that being said, one of the things we hope for these attractions is to start integrating more of this non-Guangdong mix into Studio City… [and] focus on non-gaming customers in Greater China as well as all of Southeast Asia when the borders open. We feel we have a lot of opportunities there.

“With these additional attractions, including the Super Fun Zone and water parks, you’ll need more than a day [to spend in Studio City]“, he concludes.