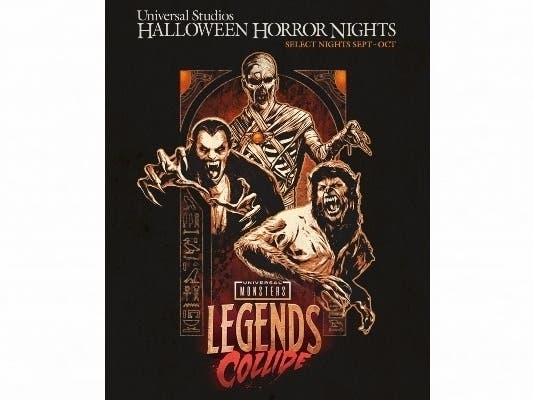 UNIVERSAL CITY, CA — Too early to start thinking about Halloween? Not at Universal Studios Hollywood.

The Universal City amusement park is gearing up for its Halloween Horror Nights, which begin in September with eight haunted houses.

For the 2022 extravaganza, Universal Pictures’ most notorious horror icons, The Wolf Man, Dracula and The Mummy, will reunite for the first time in the all-new “Universal Monsters: Legends Collide” haunted house in the part of Halloween Horror Nights at Universal Studios Hollywood — and guests will be invited to join these infamous classic monsters in an “epic battle,” park officials said.

Visitors will be transported to the 19th century with the trio of monsters in search of one thing: the Amulet of Ra, a relic which the wolf-man claims contains the power to lift his fearsome curse, while Dracula and the mummy have nefarious plans to use it to bring humanity to its knees, the park says.

“With the full moon rising and a race against time, guests find themselves entangled in a bloody battle between the terrifying titans – and only one will survive.”

Elevating the experience, Grammy Award-winning musician Slash collaborated with Universal Studios Hollywood on an original composition for the haunted house.