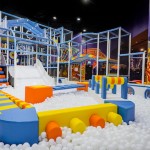 A new family attraction – announced last month – at the Studio City casino resort in the Cotai district of Macau is due to open on June 30. Ticket sales for the “Super Fun Zone” will begin on June 23, according to a press release on Tuesday.

Melco Resorts is currently building Phase 2 of Studio City. Lawrence Ho Yau Lung, the group’s chairman and chief executive, expressed during the company’s first-quarter earnings call his confidence that the task could be completed by December of this year.

Studio City Phase 2 is expected to have 900 rooms shared between two luxury hotel towers. One, the “W Macau – Studio City” should have 557 rooms, including 127 suites. The budget for this expansion project had been reduced to $1.2 billion.

The group has been granted a further six-month extension – until June 30, 2023 – by the Macau government on the deadline by which it must complete the development of its Studio City land concession.