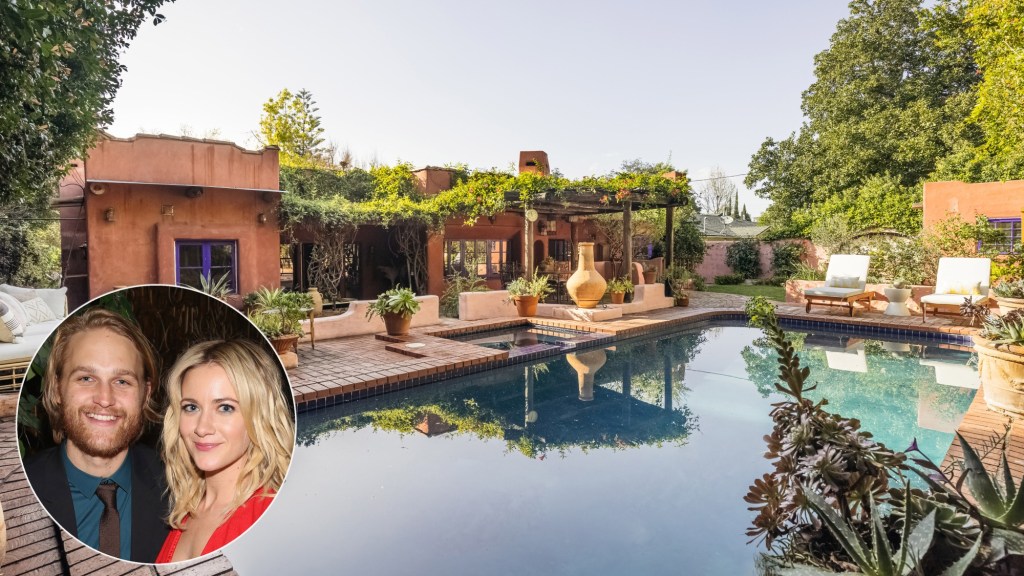 Hollywood couple Wyatt Russell and Meredith Hagner have put their hacienda-style home in Studio City on the market for $2.395 million.

Set on a generously sized lot in the Tujunga Village neighborhood, the 1937 home has three bedrooms, three bathrooms and 2,440 square feet of space “brimming with color and character,” the listing says.

Decorative details include wooden ceiling beams, terracotta tile floors and a rounded corner fireplace with a smooth plaster surround, inset with wall niches and storage for firewood. It is one of three fireplaces that warm the common areas of the house.

French doors open the house to the garden and brick-lined pool deck.

There’s a spa, a vine-covered pergola that shades a patio, and a grassy area.

A casita completes the backyard oasis.

Property records show Russell and Hagner bought the home in March 2019 for $1.7 million.

Russell, 36, is the son of Goldie Hawn and Kurt Russell and the younger half-brother of Kate Hudson. His acting career took off after an injury derailed his professional hockey career. His film and television roles include a paratrooper dropped behind enemy lines in JJ Abrams’ Nazi horror film “Overlord” (2018) and the new Captain America in Marvel Cinematic Universe’s “The Falcon and the Winter Soldier.” (2021). He can next be seen in the FX true-crime drama series “Under the Banner of Heaven,” which premieres April 28 on Hulu.

Hagner, 34, made her debut as Liberty Ciccone in the CBS daytime drama “As the World Turns,” which earned her a Daytime Emmy nomination for Outstanding Younger Actress in a Drama Series in 2009. She has also appeared in television and film, including TBS’s “Men at Work” (2012-14), TBS/HBO Max’s “Search Party” (2016-22), and the sci-fi romantic comedy ” Palm Springs” (2020) with Andy Samberg. She next appears in Apple TV+’s “Bad Monkey,” based on the popular 2013 novel of the same name by Carl Hiaasen.

The couple have a 1 year old son.