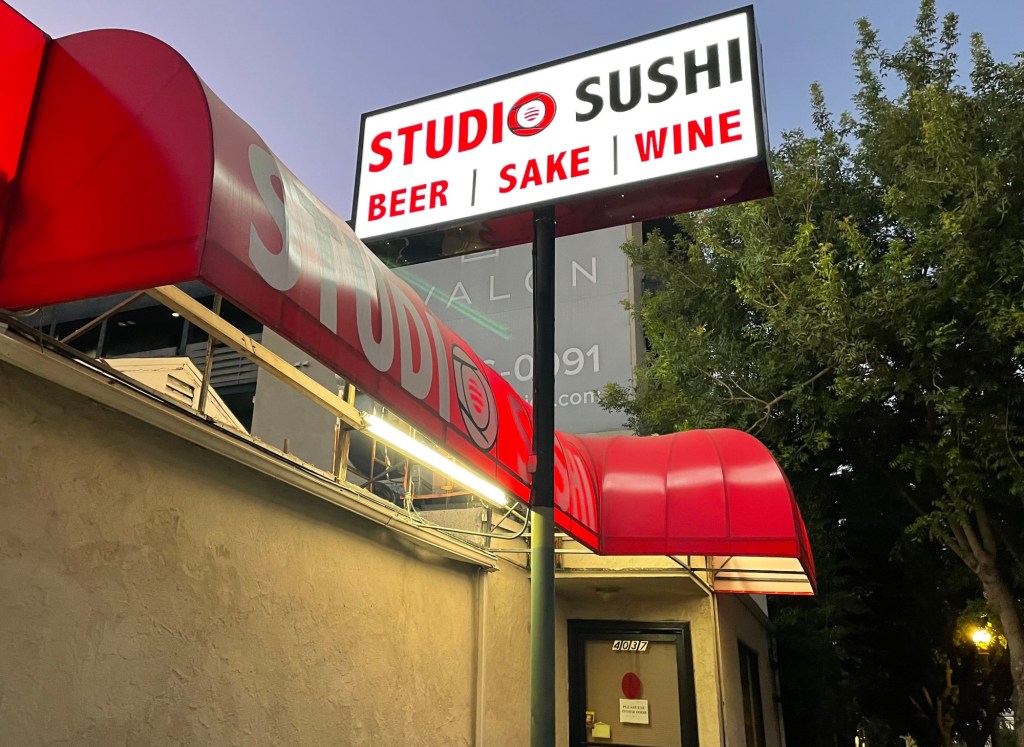 It was in 1979 that Teru Sushi opened on Ventura Boulevard in Studio City, triggering a landslide of Japanese fish houses, along what is often referred to as Studio City’s Sushi Row. The names and quality are impressive – some of the best sushi in Southern California. With Teru there is Iroha, Katsu-Ya, Kazu, Yume, Asanebo and more.

Which is why I was surprised to find myself impressed with a laid-back spot just north of Ventura on Radford, across the door from the CBS Studio Center. And the first reason I knew I was in the presence of wonders wasn’t when I tasted the fish, or the miso soup, or the rice. It was wasabi – green horseradish – which is rarely anything to notice at all.

Most sushi bars use a mixture of horseradish, mustard powder and food coloring. It has too smooth texture, almost no texture at all. Few restaurants offer freshly grated horseradish because it is very expensive and loses its potency very quickly, in less than 15 minutes.

What I noticed about wasabi at Studio Sushi was that it had a grainy texture. It had a strong flavor, but not overpowering. It was exceptional. It was quite unique. And I was told that it was actually a mixture of wasabi. Either way, it was worth using.

But God knows the sushi served at the Studio doesn’t need much more than it is. That is to say, pure and so good. It’s a neighborhood sushi bar with many levels of fun.

Another mark in Studio Sushi’s favor is that, despite offering some 35 sushi rolls, none of them suffer from excessive melting madness, which I define as the presence of cream cheese in a roll of sushi. I’m copacetic with cream cheese and smoked salmon on a Sunday morning onion bagel – it comes with the territory and the aesthetic. But I don’t want cream cheese on my sushi rolls. It looks like chocolate sauce on a cheeseburger – so shockingly wrong. And so, what we have here is rice, seafood, soy, avocado, sesame seeds – even ginger-flavored mayo, which is pushing the edge. But no cream cheese. Praise the Lord…and pass the wasabi!

Studio Sushi is affable, laid-back, and kid-friendly, plus it’s easy to be in, with a minimalist outdoor patio to boot. Want to try a lot for a great price, show up for the lunch specials. For $17 you get seven pieces of sushi on the Nigiri Sushi Mix. For the same price, you get nine pieces of sashimi. And for $13 there’s the Hand Roll Lunch, a selection of seven rolls, of which you can choose three. They are all served with miso soup. Meals always are.

There is also a lunch combination that mixes rolls, sushi and various teriyaki. It costs $15 and comes with miso soup, salad, and rice. A banquet! (Lunches reappear as dinners, for a bit more. But only on sight.)

If anything unexpected, it’s the jalapeño poppers, stuffed with spicy tuna and—yes! – Cream cheese. The eel sauce rises on top. I pass. But not on the finely assembled sashimi salad. Or the complex avocado and shiitake salad, with cherry tomatoes, microgreens and yuzu vinaigrette. Or black cod marinated in miso, a standard in any good sushi bar, and always good. Black cod butterines guarantee this.

But ultimately, of course, Studio Sushi is about fish. And these are very beautiful things. (Studio Sushi is closed on Sundays because, you know, fish markets aren’t open.) Nigiri sushi is mirrored with sashimi for a whole lot more – but it’s worth it if you’re trying to minimize the rice white in your diet.

I particularly like… well, almost everything, from bluefin tuna to black sea bream, from Japanese mackerel to giant scallops, from freshwater eel to sea urchin, my beloved uni, which I always loved it.

The simplest of the rolls – the 22 makis – uses the fish pretty much in its natural state, but wrapped in seaweed with a touch of seasoning. The specialty rolls mix, like I said, shrimp tempura (crispy!) and create combinations like the Blue Crab and Scallop Roll, and the Spicy Tuna and Yellowtail Yuzu Ebi-Ten Roll.

There are seasonal specials printed on a separate sheet of paper – seared sea scallop nigiri, with uni and caviar (so indulgent!), the hamachi fire roll with spicy crab, yellowtail and jalapeño. And everything is better with this freshly grated wasabi. Much better. God is in the details. And the taste too!

Merrill Shindler is a freelance food critic based in Los Angeles. Email mreats@aol.com.

2021-12-27
Previous Post: Br!! A powerful storm will bring Christmas rain to Studio City
Next Post: How to Create a DIY Christmas Photo Studio Setup at Home