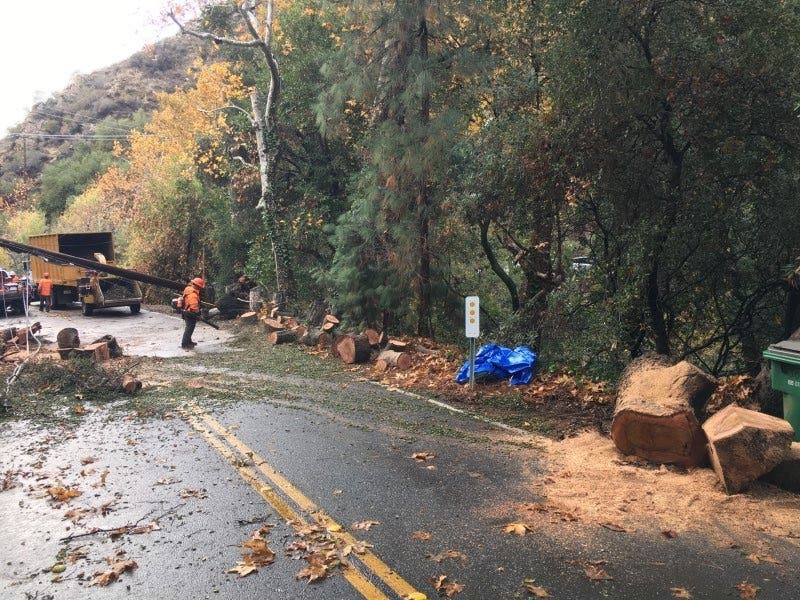 STUDIO CITY, CA – Heavy rain hit Studio City overnight and early Thursday. Across Los Angeles County, mudslides, debris flows and flooding were the stories of the day on Thursday after

A flash flood watch remained in effect for Southern California including Los Angeles County, Ventura County, Orange County, San Bernadino County Mountains, Santa Ana Mountains and the foothills. Rains of 1 inch to 2.5 inches were expected in the mountains and foothills, with heavy snowfall expected over 5,000 feet.

Flash flood monitoring will continue through Thursday afternoon for burned areas in Los Angeles County from the Lake, Bobcat, Dam and Ranch 2 fires.

Forecasters said the areas could see “several hours of moderate to heavy rain… which could lead to flash flooding and debris flows”.

Across Southland, a messy morning drive was thankfully light due to the upcoming New Years holiday weekend.

Showers along the coast continued throughout the morning, although the rain was expected to ease in the afternoon, giving way to a dry but cool weekend.

A winter storm warning would remain in effect until 8 p.m. for the Los Angeles County mountains, excluding the Santa Monica Range.

The National Weather Service said 1 to 3 feet of snow would accumulate above 5,000 feet, with “light snow” falling at lower elevations. Winds were also blowing in the area, with the NWS indicating that sustained winds of 45 to 50 mph were forecast, with gusts at higher altitudes of up to 60 mph.

“Travel can be very difficult, if not impossible,” according to the NWS.

Sections of the Angeles Crest Highway were closed due to poor weather conditions and State Route 39.

Caltrans reminded motorists that chains are required on the Angeles Crest Highway north of La Canada Flintridge. The agency urged motorists to be aware of road conditions and anticipate possible closures due to snow.

Gusty winds were also impacting Antelope Valley. The NWS issued a wind advisory until 10 p.m. Forecasters said the region should expect winds of 15-30mph, gusting up to 45mph, potentially reducing visibility for motorists and blowing dust onto the roads.

According to the NWS, 2 to 4 inches of rain could fall on coastal areas and valleys in LA County as the storm moves in, with 3 to 7 inches falling in the mountains.

“By (Thursday), the more regular rainfall is expected to persist over LA County through at least the morning, then become more downpours in the afternoon,” according to the NWS.

Forecasters said there would be a risk of thunderstorms.

Temperatures will also remain “significantly below average” across the region, according to the NWS.

In Orange County, a mandatory evacuation order was downgraded to a voluntary evacuation warning in Silverado, Williams and Modjeska Canyon beginning at 10 a.m. Thursday.

Soft road closures were expected at entrances to the canyon, and many roads were open to residents only, the Orange County Sheriff’s Department said.

The NWS has issued a flash flood watch for coastal and interior areas of Orange County and the Santa Ana Mountains, including the Bond Fire burn area. The flash flood watch will be in effect until Thursday afternoon, although the evacuation warning has been downgraded to an evacuation watch from 10 a.m.
“Excessive runoff can lead to flooding of rivers, streams, creeks and other low, flood-prone places,” according to the NWS.

NWS forecasters for Orange County said the region could receive up to 2.5 inches of rain along the coast and up to 6 inches in the mountains below 5,000 feet.

An hourly rainfall amount of 0.6 to 0.7 inches was possible.